Google Adwords Expanded Text Ads are Upon us! 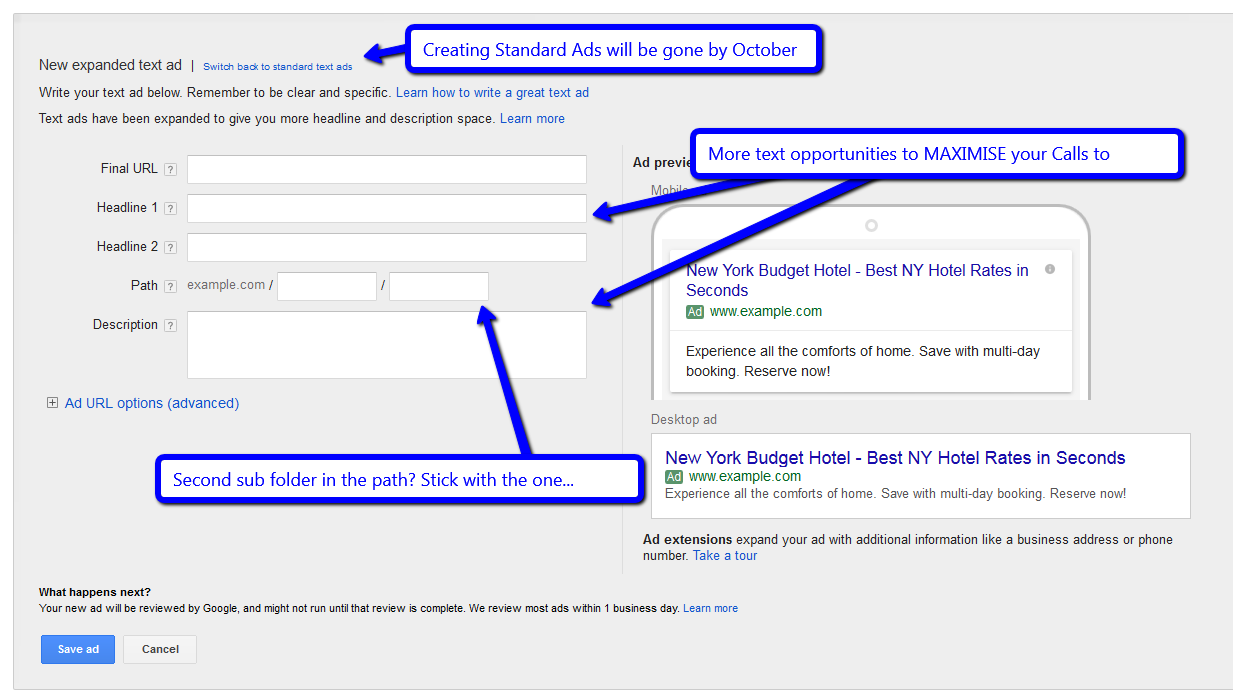 Anyone worth their salt with Google Adwords has been waiting with bated breath for the upcoming Expanded Text Ads and associated updates announced at Google Performance Summit 2016 back in May, and now they’re upon us!

Made available this week, it allows Adwords practitioners to make greater use of valuable screen space (certainly on mobile), to attract more visitors to click on their ads. On the downside it’s going to affect organic results for SEO’s – perhaps much more for mobile where the real power of Expanded Text Ads is really going to come into play.
Google has stated the creation of Standard Ads will be stopped from October of this year so this isn’t something you can’t afford to ignore.

With current Standard Ads your headline can be no longer than 25 characters, whereas the new ad format allows you up to 30 characters in each headline field.

Also Google is allowing advertisers to use up to 80 characters in the description field – up from a 70 character limit, split over 2 lines, with a Standard ad.

In general it appears the Expanded Text Ads have been optimised by Google to display much more prominently in the results on popular smartphones. Google seems to want generate greater CTR performance from mobile ad users, so pushing organic results further down on mobile, ensuring Ads look that little bit more organic could generate a higher Click Through Rate (and higher revenue) for them.

Our Adwords specialist, Darren Moloney, has stated the following when it comes to getting the most from your Expanded Text Ads.

With more headline space you have the opportunity to maximise the call to action in your headlines, so don’t disregard this opportunity.

Watch out for Google truncating your headline, there have been some comments on Twitter about this and Google has tried to come up with a resolution:

Pay close attention to the expanded text ad character limit as you are now allowed a total of 80 characters (up from 70 characters) in the Ad Description, so you should be able to write more informed or detailed ads which resonate with folk looking for your products & services.

There is no longer a need to add the domain in to the Display Path as this is taken from the Final URL so it should save you some time when creating new Expanded Ads.

You get 2 Display Path fields of up 15 characters each so you should test Ads with two completed and just the one. Users may find it easier to read just one keyword in your URL display path but using two allows you to use another keyword to make your ad more relevant and attract more clicks. Play around with the order of keywords in this path, it could make a huge difference to your campaign’s peformance. It is entirely optional though, if you just don’t want to use keywords in the display path then you’re not forced to do so. Well, not yet anyway!

Note that you’ll no longer need to tick a box to show a preference for your ad to show on mobile, so it will show regardless of the platform your visitor is on.

Don’t forget to update your ad extensions too as you could inadvertently duplicate content in your headline or description that might already be in an ad extension, creating some level of duplicity. This could mean you could miss out on further sales and leads opportunities.

To find out more head over to Google’s Adwords Blog right here… https://adwords.googleblog.com/2016/07/three-ad-innovations-for-mobile-first-world.html